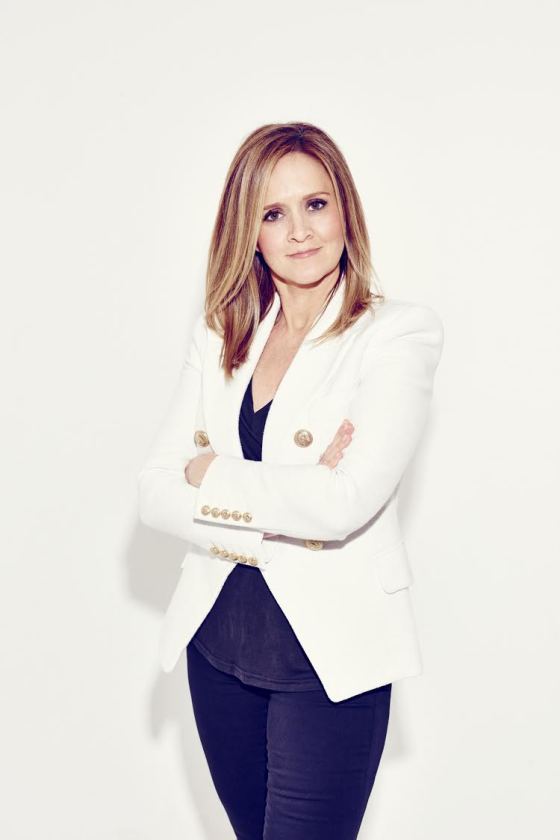 Samantha Bee has quickly established herself as having one of the most unique and sharp comedic voices on televisionwith her late-night show "Full Frontal with Samantha Bee." Born and raised in Toronto, Canada, Bee began her career performing as a member of the all-female sketch comedy troupe The Atomic Fireballs. In 2003, Bee joined Comedy Central's "The Daily Show's "Best F#@king News Team." Bee departed "The Daily Show" in 2015 and currently holds the title for being the longest-serving regular "Daily Show" correspondent of all time (12 years). Additionally, during her time at "The Daily Show," Bee was the sole female correspondent from 2006 until 2008.

Bee hosted the wildly successful “Not The White House Correspondents Dinner” on April 29, 2017, the evening of the traditional White House Correspondents Dinner. Her event celebrated a free and open press under the Trump administration, which was presented on TBS. The special was nominated for four primetime Emmy Awards, and won in the category of “Outstanding Variety Special.” In 2016, Bee received global recognition from the success of her very own weekly late-night comedy series, "Full Frontal with Samantha Bee," which premiered Monday, February 8, 2016 on TBS. "Full Frontal" offers a unique satirical take on weekly news and explores other important stories in-depth that have been largely overlooked by more traditional media outlets. "Full Frontal" received rave reviews, and the show was picked up by TBS for a full season within weeks of its premiere, and renewed for a second season. In a landscape of male late-night talk show hosts, critics have appreciated Bee's "fiery and fierce" delivery (The New York Times) and have embraced "Full Frontal" as a "daring, innovative addition to the late-night slate" (Entertainment Weekly).

Bee earned a 2016 TCA Award nomination for “Individual Achievement in Comedy” for her work on "Full Frontal," and the show received its own nomination in both 2016 and 2017 in the category of “Outstanding News and Information” from the Television Critics Association. She and the show were also nominated for three Primetime Emmy’sin 2017, including “Outstanding Variety Talk Series” and “Outstanding Writing For A Variety Series,” for which the show also received a nomination in 2016. Bee and her husband Jason Jones also co-created the 10-episode, half-hour comedy series, "The Detour," whose second season premiered on TBS on February 21, 2017. "The Detour," which stars Jones, is inspired by their personal experiences on family getaways. The show follows Nate (Jones), Robin (Natalie Zea) and their two kids, Delilah and Jared, for what Nate believes will be the adventure of a lifetime on a road trip to Florida, which quickly turns into a disaster. The series was renewed for second season ahead of its April 11, 2016 premiere. In 2015, Bee appeared opposite Tina Fey and Amy Poehler in the comedy film "Sisters," directed by Jason Moore and written by Paula Pell. Last year, Bee appeared in "Learning to Drive," alongside Patricia Clarkson and Ben Kingsley. Additionally, she starred opposite Jason Jones in the 2010 film titled "Coopers’ Christmas." In 2010, Simon and Schuster published Bee's collection of personal essays, titled "I Know I Am, But What Are You?" She is currently writing a middle-grade novel for Farrar Straus Giroux.