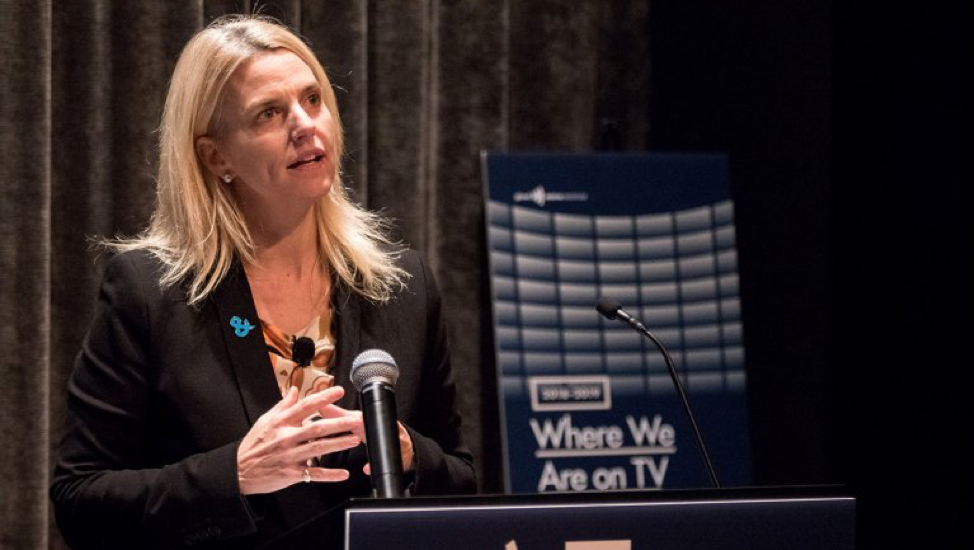 Timed to the latest report on LGBTQ inclusion in television, GLAAD president and CEO Sarah Kate Ellis challenged networks and TV creators on Thursday to increase LGBTQ characters to least 10 percent of series regulars on scripted primetime broadcast shows by 2020.

“We know we can do it. Greg [Berlanti] can do it alone,” Ellis joked during the media advocacy organization's first-ever launch event for the report at UTA's headquarters in Beverly Hills. (Berlanti, the executive producer of Arrow, The Flash and Riverdale, among others, was present.)

Also during the event, Nielsen senior vp product leadership Brian Fuhrer officially announced that the data and measurement company has partnered with GLAAD to expand Nielsen's national survey to include same-gender couples. Fuhrer said that the measurement of same-sex households was a start, but that Nielsen intends to go further with the audience. “The next step is going to be a lot harder, to allow our [individual, uncoupled] panelists to self-identify,” Fuhrer said. “While this is big news, I don’t want anyone to perceive that we’re stopping here.”

Ellis explained that one of the “setbacks” GLAAD and Nielsen encountered during their collaboration was that the 2020 census was supposed to count LGBTQ households. “Since this current administration has taken power over, they’ve since erased us from the 2020 census, so we’ve had to build these workarounds,” Ellis said.

These announcements, and a presentation of the “Where We Are on TV” results, were followed by a panel including producers Berlanti and Steven Canals (Pose); actress Lyrica Okano, who plays a bisexual superhero on Marvel’s Runaways; UTA TV agent Lucinda Moorhead; and GLAAD’s Ellis, who discussed the evolution in LGBTQ representation in the last few years, why film has fallen behind television in GLAAD’s reports and how networks can meet GLAAD’s 2020 challenge. GLAAD’s findings for this television season are positive: According to the latest report, all platforms this season posted increases for LGBTQ characters from the 2017-2018 season: Broadcast saw a 31 percent increase, cable a 20 percent increase and streaming a 72 percent increase. Across the board, bisexual+ characters have increased nearly 26 percent, transgender characters have increased 53 percent and HIV-positive characters have increased 350 percent from the previous year. Of all the broadcast networks, The CW received the highest marks for LGBTQ inclusion this season. Netflix, meanwhile, won out for streaming, and FX for cable. When asked what has changed since he worked on Dawson’s Creek (and threatened to quit to get a same-sex kiss on the air), Berlanti said that creators no longer have to fight for same-sex expressions of affection. Also, he added, straight allies are suggesting queer characters and “the young audience is as diverse as the programs we’re talking about,” he said.

Ellis talked about why policy from the White House contrasted so vividly with the findings of the report. Just one day earlier, a leaked memo suggested that the Trump administration is considering defining gender as a condition defined by genitalia given at birth.

“This is, I believe, a backlash to some of the movement we’ve had,” Ellis said. “Right now, Hollywood is the bright light, and that’s amazing. … The key is that we see it move in that direction and it doesn’t stop here.” When moderator Mark Malkin asked the panel why television is doing better than film in terms of LGBTQ representation, per GLAAD’s annual reports, Ellis argued that film is showing progress this fall, but streaming platforms had pushed television towards greater inclusivity more quickly than film. Movies are “mired in a two-year pipeline, international distribution versus domestic,” she said, but are starting to change.

On the other hand, Berlanti, the director of this year’s gay rom-com Love, Simon, argued that independent film had preceded television in LGBTQ representation. “I think independent and art house cinema was always at the forefront; to me they were there were [there] before cable TV,” adding that he thought they remained at the forefront but that the dwindling number of studio films was restricting characters portrayed “at a time when they should be expanding.”

Berlanti added that theatrical releases are also “a bit antiquated.” Typical teen movies generally get a 3,000-screen release, he said; his Love, Simon was released in around 2,000 screens. The film’s opening weekend at the box office “would have been $18 [hundred thousand] and it was $11 [hundred thousand], but we were on 1,000 less screens,” he said.

Though the panel’s mood was generally celebratory, Canals brought some sober perspective to the discussion. When asked about Pose’s role in introducing more Americans — only 16 percent of whom say they know a transgender individual — to transgender people, he replied, “It’s tough because there are moments where I feel like a show like Pose is important and having an LGBTQ superhero is important, but I can get cynical, dark,” referencing the Trump administration. “I do believe in art and its advocacy, but it’s not enough. There are steps that we need to take.”

He called watching a show like Pose “trans 101” and said he hoped that the series would “translate into action” for marginalized communities. When asked how networks and creators could achieve GLAAD’s 10 percent by 2020 goal, panelists’ answers varied. Canals said that everyone “in the room” should keep in mind that marginalized communities aren’t a monolith and should have many shows, not a few. Ellis noted that series need to have both LGBTQ characters in front of the camera and behind the camera, while Berlanti advised people to support more LGBTQ creators. Moorhead, taking the representative’s perspective, said she and her agency colleagues could fight for their LGBTQ and ally clients. Okano, for her part, reminded the room that representation wasn’t a trend: “It’s not a new cool thing, it’s my closest friends, people who I dearly love,” she said.